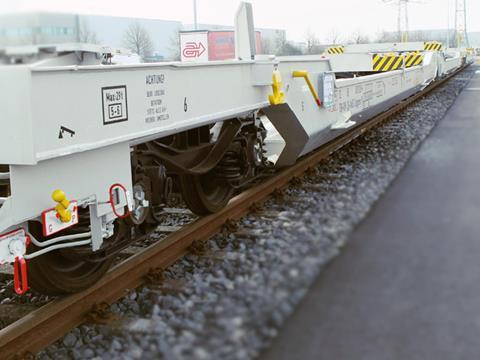 Sachsenröder said that AAE was pleased to have secured its long-time partner ERS as the first large customer ‘for the new generation of low-noise, high-performance and low-maintenance pocket wagons’, developed in-house by the leasing company. Amongst the technical advantages of the Twin II, Schuhholz highlighted a weight saving of 2 tonnes on existing wagons, as well as disc brakes halving noise emissions and reducing maintenance requirements as they ‘do not roughen the wheelsets’.

A subsidiary of Danish shipping group AP Møller-Maersk, ERS has agreed to lease half of the initial build of 100 Twin II wagons which represents an investment of €20m by AAE. Deliveries are due to begin in November for completion in the second quarter of 2013. ‘We knew that the market was waiting for these vehicles and thus have secured options for several hundred additional wagons’, said Sachsenröder.