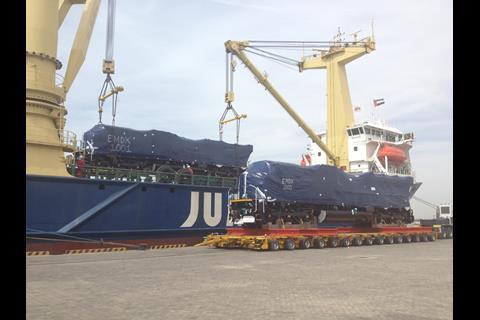 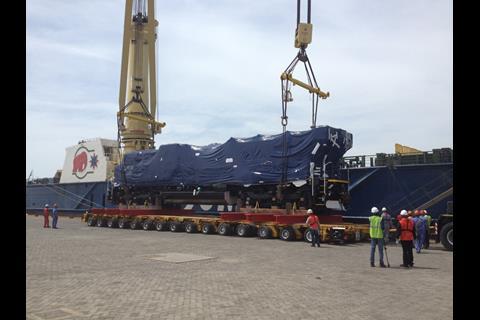 UAE: The first two of seven SD70ACS locomotives which Electro-Motive Diesel is supplying for the initial phase of the national rail network have been unloaded at Mussafah Port in Abu Dhabi, Etihad Rail announced on April 10.

The heavy freight locomotives are to be moved to Mirfa in the Western Region in preparation for the launch of the 266 km Stage One, which will initially carry granulated sulphur from Shah and Habshan for export through the port of Ruwais.

Etihad Rail said the livery of the locomotives incorporates the colours of the UAE flag 'as a symbol of national pride and unity'.

'The arrival of these locomotives is a remarkable step forward and another indicator that we are fast approaching the commencement of operations for Stage One', said Dr Nasser Al Mansoori, CEO of Etihad Rail. 'The project is progressing on schedule and we are on track to see the first train run between Habshan and Ruwais by the end of this year. This achievement would not have been possible without the dedication and collaborative efforts of all parties working together towards the mutual goal of developing a national railway network that will change the face of transportation in the UAE and the wider GCC.'

The contract for seven locomotives was awarded to EMD in August 2011. Another EMD locomotive has already been delivered to the UAE as a demonstrator.