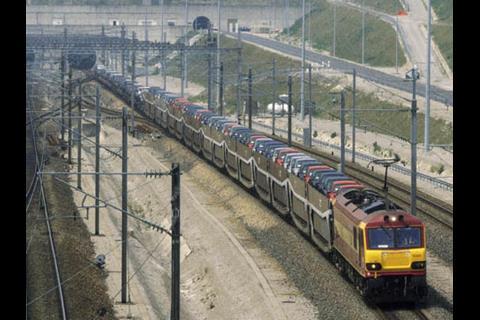 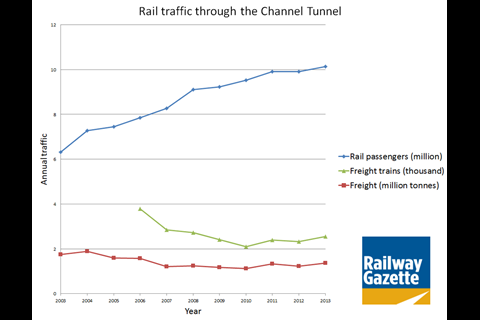 EUROPE: Channel Tunnel concessionaire Eurotunnel announced a reduction in track access charges of up to 50% on April 28, saying it hopes this will lead to a doubling of the number of freight trains through the tunnel to 5 000 per year in 2018.

The announcement follows the European Commission opening an infringement procedure in June 2013 looking into whether France and the UK had failed to implement EU rules on access to the Channel Tunnel.

The revised access charges will apply from June 2014 until 2023. The Eurotunnel Incentive for Capacity Additions scheme which offers rebates to new entrants will also be extended to 2018 and expanded from intermodal trains to include the transport of new cars, food and drink in conventional full train loads, consumer goods, logistics flows, manufactured goods and permanent distribution and service flows ‘suffering from obstacles outside of the Fixed Link’.

Eurotunnel’s own Shuttle services are excluded from most EU rail rules, including those on track access charges, and were not covered by the EC infringement proceedings.

In addition, the Intergovernmental Commission which regulates the tunnel has issued a decision obliging Eurotunnel to make its costs more transparent, and a €600 security fee imposed by French infrastructure manager RFF on UK-bound trains is to be eliminated.

The European Commission welcomed the changes, and has dropped the infringement procedure against the two countries. It said the average one-way access charge of approximately €4 500 per freight train was ‘a major reason’ why there is 43% unused capacity in the tunnel, with seven freight trains/day rather ’30 to 40 a day as originally envisaged when the tunnel was opened’. The Commission believes freight is being carried on lorries rather than by rail as a result.

‘I welcome Eurotunnel's announcement because it should pave the way for more freight to use the Channel Tunnel and at lower prices’, said EU Transport Commissioner Siim Kallas. ‘It stands to unblock a major bottleneck in Europe's transport network. This is good news for Europe's businesses that rely on effective and competitively priced transport services and good news for consumers they serve. It is also good news for the environment, as rail is the most energy efficient way of transporting goods.’