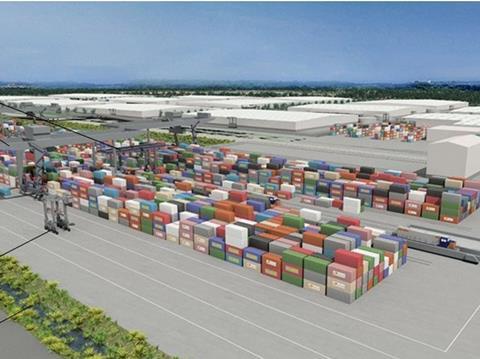 ​AUSTRALIA: An agreement for the development and operation of a major intermodal freight terminal in southwest Sydney was signed by the federal government’s Moorebank Intermodal Co and the Sydney Intermodal Terminal Alliance of Qube Holdings (67%) and Aurizon (33%) on June 4.

The development would be on federal and SIMTA land. The first phase covers an import-export terminal with a rail connection to Port Botany via the Southern Sydney Freight Line. This would have an initial capacity of 250 000 containers/year when it opens in late 2017, increasing to 1·05 million containers/year.

The project also involves the development of associated warehousing.

The cost of the terminal is estimated at A$1·5bn over 10 years. SIMTA is to provide A$700m for phases one and two, while the A$800m for the warehouse development would involve commercial negotiations with prospective tenants and third-party funding. Aurizon’s capital contribution is expected to be up to $235m.

The federal government would provide A$370m to support the project, including funding a connection to the Southern Sydney Freight Line, on which it would receive a fixed return.

‘Moorebank will be the largest integrated warehouse rail terminal precinct in Australia’, said Aurizon Managing Director & CEO Lance Hockridge. ‘It will help drive competitive advantage for Aurizon and Qube because of its strategic location, unprecedented scale and the seamless integration of port, rail and road. Coupled with the efficiencies available to greenfield operations, it will reduce logistics costs and provide greater opportunity for a sustained modal shift from road to rail. Moorebank provides Aurizon the opportunity to diversify our general freight portfolio into the rapidly-growing import-export market, connected by rail to one of Australia’s busiest ports.’