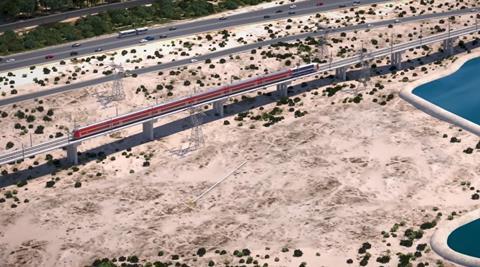 ISRAEL: The Electra Infrastructures consortium has been selected as preferred bidder to undertake civil engineering works on the planned 30 km line between Rishon Le-Ziyyon and Modi’in, Israel Railways announced on September 10.

The electrified east-west line will largely follow the median of Highway 431, forming the southern part of a proposed 100 km rail loop around the Greater Tel Aviv Area; the Highway 531 line forming the northern section through Ra’anana was opened in July 2018.

Total cost of the project is put at around US$900m, of which the Electra Infrastructures contact is valued at US$112m.

Expected to open in 2026, the line would initially be served by two trains/h in each direction, increasing to four once extra capacity has been provided at Modi’in and Jerusalem Navon stations. The line is expected to carry around 15 000 passengers/ day. Journey times from Rishon Le-Ziyyon Moshe Dayan to Modi’in would be cut from 60 min to 30 min, while the time to Jerusalem Navon would fall from 80 min to 45 min.