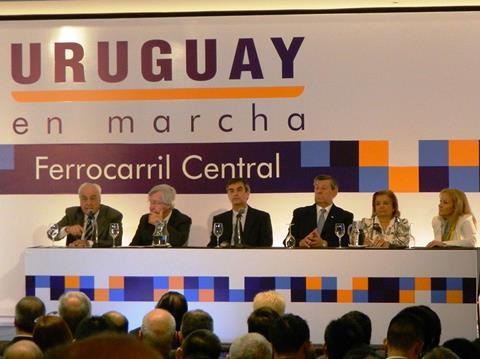 URUGUAY: President Tabaré Vázquez joined Minister of Transport & Public Works Victor Rossi on August 15 to officially launch the Ferrocarril Central project, a public-private partnership to upgrade the 273 km Montevideo — Paso de los Toros route. To be tendered in September, the contract will also include maintenance over a period of 22 years.

As well as relaying track with 54 kg/m rail on concrete sleepers to accommodate axleloads up to 22∙5 tonnes, the project will include laying a second track on the 17∙2 km between Empalme Tablada and Progreso. In an area currently prone to flooding, a new alignment is to be built between Margat and 25 de Agosto, which combined with easing curves at Independencia, Cardal and Sarandí will shorten route length by 8 km.

In the Montevideo area, the railway is to be lowered into two short cuttings at Carnelli and Las Piedras to eliminate level crossings. Several other crossings are to be replaced with new bridges over or under the railway, while those remaining are to be equipped with automatic gates.

Under an agreement with state railway AFE, the Ministry of Transport & Public Works will be responsible for taking the Ferrocarril Central project forward. According to Rossi, work is expected to start by mid-2018.