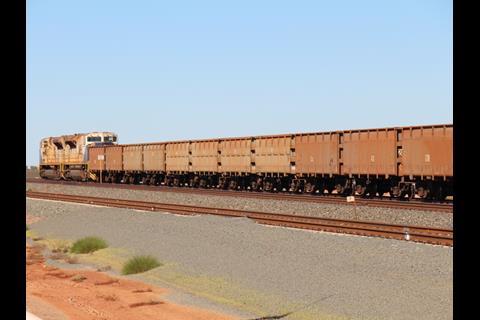 AUSTRALIA: Around 143 km of new railway is to be built in the Pilbara region of Western Australia as part of a A$1·7bn development programme announced by Fortescue Metals Group Chief Executive Elizabeth Gaines on May 28. The extension from the Solomon Hub will connect the group’s planned Western Hub to its existing 620 km rail network feeding the Herb Elliott Port at Port Hedland.

The FMG board has decided to push ahead with development of the planned Eliwana mine in the Western Hub to replace the Firetail mine at Solomon which is now close to the end of its life. Located approximately 90 km west-northwest of Tom Price, Eliwana was reportedly selected for development ahead of another deposit at Nyidinghu in the Chichester Ranges because of its higher quality ore.

Fortescue has already completed a definitive feasibility study for the Western Hub, and will shortly begin detailed design work. The project is to be developed over the next three financial years, with the bulk of the investment scheduled for FY2020.

Eliwana is expected to produce an average of 30 million tonnes a year and a maximum of 50 million tonnes, with a working life of 24 years. Gaines said this would allow FMG to maintain a minimum annual output of 170 million tonnes over the next 20 years. ‘Fortescue has now shipped over 1 billion tonnes of iron ore in just 10 years’, she pointed out; the company had celebrated the anniversary of its first shipment on May 15.

According to Gaines, the Western Hub is expected to create up to 1 900 jobs during construction, and around 500 ‘full time site positions’ once the Eliwana mine becomes fully operational.