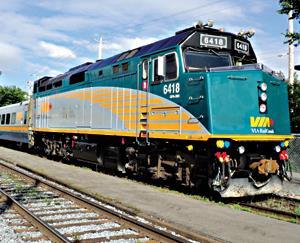 CANADA: The national government has announced an additional C$102m of funding for VIA Rail in 2015-17 to support upgrading works on the Ottawa – Montréal route.

This includes work to enable VIA Rail’s Renaissance coaches to be used on the route instead of older rolling stock, thereby enhancing accessibility; track upgrading including the installation of continuous welded rail in the Beachburg, Alexandria and Smith Falls subdivisions; structural repairs to bridges; track layout changes in the Barrhaven area; repairs to Ottawa station and the construction of high-level platforms; upgrading centralised traffic control and signalling.

‘Thanks to this new funding, VIA Rail will be able to provide a safer, more reliable and comfortable service between Ottawa and Montréal’, said VIA Rail President & CEO Yves Desjardins-Siciliano. ‘In addition, we are pleased to be able to add four frequencies (two return trips) between the two cities in 2017 as a result of the government of Canada’s investment.’