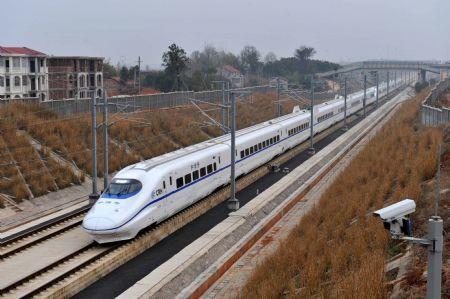 CHINA: Further rail projects have been authorised, despite the problems at the Ministry of Railways and media concerns about the cost of the massive expansion programme.

A feasibility study for the 30bn yuan Huaihua – Shaoyang – Hengyang line in Hunan province has also been approved, and detailed design of the 313 km double-track mixed-traffic 200 km/h route has begun.

Construction of the 260 km Hangzhou – Huangshan railway is set to commence this year, with an alignment designed for 200 km/h running; the main traffic is expected to be passengers.

Tracklaying has been completed on the 904 km Harbin – Dalian Passenger-Dedicated Line which will open by the end of this year. Work started in August 2007, and the project has cost 92bn yuan.

Xinjiang Uygur Autonomous Region has given the go-ahead for seven projects totalling 81bn yuan and 3310 km, including a second double-track Lanzhou – Urumqi line, electrification and upgrading of the Hongliuhe – Kazakh border section of the existing route, the Turpan – Korla secondary line, the Kuqa – Ehuobulake and Hami – Lop Nor lines and the Hami southern freight ring.