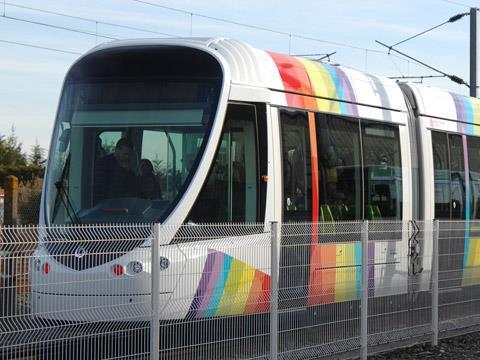 The 32·4m long and 2·4 m wide trams have a strong visual identity which was developed by Angers Loire Métropole, Alstom's design department and agency RCP Design. The nose is intended to be reminiscent of a ship's bow, the 'pastoral' interior has seat upholstery 'mirroring the slopes of the Angers hillsides' and a floral design on the ceiling 'evokes the low valleys of Anjou.'

The €47m contract for the trams was signed on November 15 2006. Deliveries will run from November 2009 to the end of 2010. The trams will run on the 12 km Line A, which will run from Roseraie in the south of the city to Avrillé Nord, with 25 stops. Two sections of the route totalling 1·5 km will be equipped with the APS ground-level power supply pioneered in Bordeaux.

Opening is planned for 2010, with services operated by Keolis.