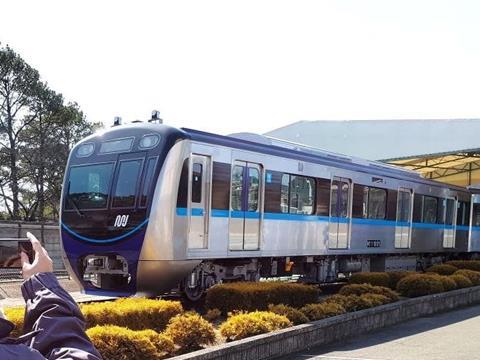 INDONESIA: The first trainset for the Jakarta metro was rolled out from Nippon Sharyo’s Toyokawa Plant on February 21. The second is due to be completed on March 7, and both will be shipped from the port of Toyohashi, with arrival at Tanjung Priok port in Jakarta expected on March 26.

In 2015 MRT Jakarta awarded Sumitomo Corp and Nippon Sharyo a ¥13bn contract for the supply of 16 six-car trainsets for the city’s first metro line. The trainsets are designed according to the Standard Urban Railway System for Asia specification, developed to promote the export of rolling stock to other Asian markets. The Japanese suppliers have established a railway engineering firm in Indonesia with a local partner.

Work on the 15·7 km partly underground north-south line started in 2013, and tunnelling was completed last year. Due to open in 2019, the first stage will connect Lebak Bulus in the south of Jakarta to Hotel Indonesia traffic circle with 13 stations. This is intended to form the initial phase of a larger network.