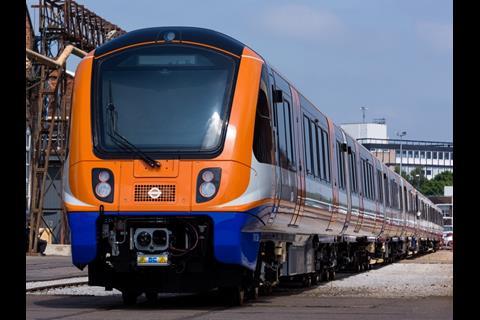 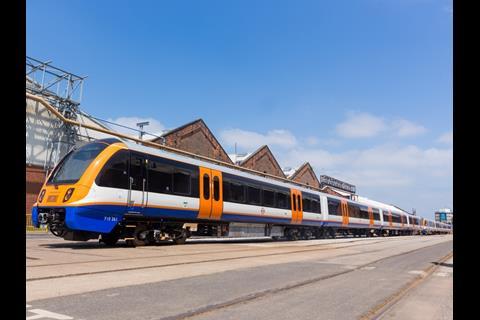 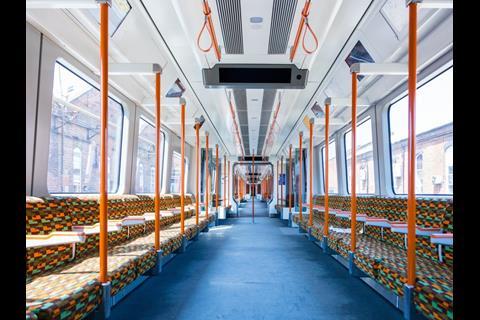 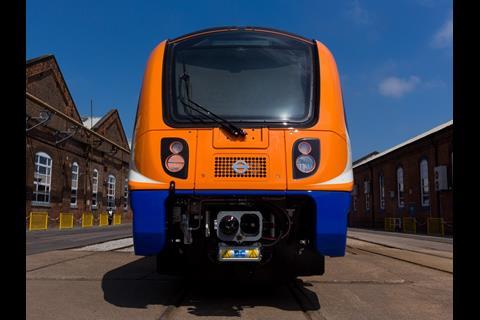 Bombardier Transportation is supplying 54 Class 710 trains under a contract awarded in mid-2015. The base order covers 45 four-car trainsets, with options for 96 more. CAF, Hitachi and Siemens had also been shortlisted for the £260m contract.

In December 2017 TfL exercised an option for six five-car and three four-car sets. Of the base order, 31 trains are equipped for 25 kV 50 Hz overhead electrification and the remaining 14 are dual-voltage units also able to operate on 750 V DC third-rail. All nine EMUs in the option will be dual-voltage units.

Bombardier started work on the first train at its Derby factory in October 2016. To date 26 four-car sets have been completed, and the company expects to finish deliveries of the base order this year. The extra nine EMUs are to be delivered next year.

The first eight EMUs are to be put into service on the Gospel Oak – Barking route, where they will replace two-car DMUs following electrification of the route at 25 kV 50 Hz. Final approval of electrification work was completed in mid-June, allowing the Class 710 trains to begin testing on this route in the coming months ahead of entry into passenger service by November. Six will be required for regular services. TfL’s Director of Rail Jonathan Fox explained that the line in northeast London will be the first to receive the Class 710 trains, as this is where the greatest capacity increase can be applied.

Six EMUs, of which four will be required for regular service, are to be allocated to the Euston – Watford route. This will allow the existing five-car Class 378 trains to be cascaded to work the North London Line. This would allow peak frequencies between Stratford and Willesden Junction to increase to 10 trains/h, up from eight currently. Fox explains the reason for the cascade as being the greater need for five-car trains on the North London Line.

The 31 AC-only trainsets are to be put into service on the West Anglia routes running north from Liverpool Street.

In the longer term three additional trains would be required on the Gospel Oak – Barking Line once the one-station extension to Barking Riverside opens. Construction of the 4 km eastern extension is expected to begin this year, with opening due in 2021. TfL plans to increase services on the Euston – Watford route to four trains/h in May 2019, and is considering increasing frequencies on its other routes.

The four-car walkthrough train has capacity for 675 passengers including 195 seated. It has 36 USB charging sockets, wi-fi supplied by Icomera, LCD advertising and information screens, and tip-up seats. The air-conditioned train is equipped with ‘intelligent’ lighting and temperature control. Maximum speed is 120 km/h.

The Class 710 is the second model to be produced from Bombardier’s Aventra family, after the Class 345 EMUs that will operate on London’s Elizabeth Line. Bombardier is also supplying Aventra EMUs for use by Greater Anglia, West Midlands Trains and c2c.

Aventra is the successor to Bombardier’s Electrostar and Turbostar families, currently in use on most London Overground routes. Head of UK Andy Derbyshire said that Bombardier would look to develop an electro-diesel version of the Aventra in the future.

The Class 710 fleet will be stabled at the London Overground depots at Willesden and Chingford. One unit is currently undergoing static testing at Willesden, having had brake tests at the Valenciennes test circuit in France.

London Overground services are operated by Arriva Rail London on behalf of TfL under a 7½ year concession that commenced on November 13 2016. Bombardier will maintain the fleet, and has installed its Automatic Vehicle Inspection System at Willesden and Chingford. This uses RFID sensors and lasers to inspect the trains as they pass through. A total investment of £10m has been made at Willesden and £7m at Chingford in preparation for the new fleet. Knorr-Bremse subsidiary Sydac has supplied a driver training simulator for the new fleet to the Willesden depot.