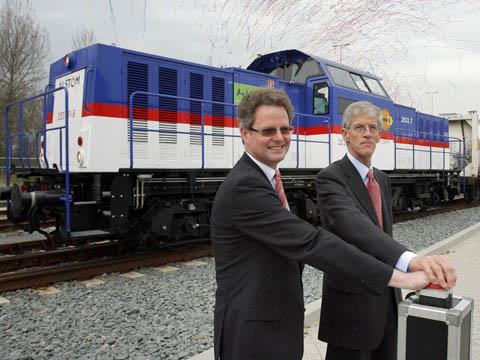 NETHERLANDS: A two-month long trial of a hybrid shunting locomotive converted by Alstom began in the port of Rotterdam on April 6.

Short-haul and shunting operator Rotterdam Rail Feeding expects to see a 40% reduction in fuel consumption, with a halving of particulate, NOx and CO2 emissions. Noise should also be reduced by 15 dBa.

First unveiled in a partially completed state at InnoTrans 2006, the 68 tonne locomotive was converted by Alstom from a former DB diesel-hydraulic. It has a 200 kW Deutz diesel engine, smaller than a typical shunter, which is used to charge a 5 800 kg NiCd battery and only operates when the locomotive is moving.

The battery maintains the auxiliary systems while the locomotive is stationary, and provides power to boost performance at maximum output.