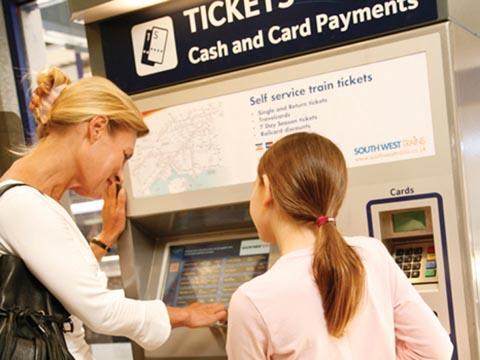 WATCHING passengers trying to buy tickets is a key part of research being carried out by Amberlight, a consultancy specialising in human-computer interaction which has been hired to improve the user interface of self-service ticket machines operated by South Eastern Trains.

The British train operator appointed Amberlight last October to advise on how it could improve customer satisfaction and the efficiency of transactions on 150 touch-screen ticket vending machines supplied to SET by Scheidt & Bachmann under a contract signed in June 2004 and worth £7m over 10 years.

The project is Amberlight's first in the rail sector, a market which Head of Consultancy Gerred Blyth is 'very interested in getting into', because of the opportunity to work with 'genuine users, with a genuine goal'. Its research methodologies have been established through extensive work on websites and mobile telephone interfaces in Europe and Asia, but are 'new to the railways', according to Blyth. Train operators have generally relied on quality assurance testing with staff 'trying every option' on screen, but Blyth says operators have done little testing with 'real passengers'.

Starting in November, SET passengers were observed buying tickets, before Amberlight consultants introduced themselves and asked if the customer would explain their thought processes and actions, 'talking aloud' as they used the machines. Questionnaires were distributed and two customer focus groups organised, allowing Amberlight to 'acquire a deep understanding' of 'what mistakes passengers are making, and why'.

Passengers were pressing more buttons than needed for common transactions, increasing the chances of mistakes which added to frustration. The study found that passengers are 'acutely aware' of queues behind them, an issue which does not arise with web sales, and customer satisfaction needs transactions far quicker than those of mobile telephone interfaces.

The most commonly sold ticket types and destinations vary with the time of day, and Amberlight has recommended that the most prominently displayed options change throughout the day, so that the tickets most likely to be purchased are the most likely to be sold.

Blyth believes that user testers should work with train operators and machine manufacturers during part of the ticket machine design process, 'the earlier the better', and especially when the hardware can be improved at the prototype stage. It was found that passengers can be reluctant to use ticket machines because of past 'bad experiences' of queuing and working through menus only to find the machine is out of change, and so usage can be increased if passengers can easily see whether a machine has change before they even join the queue. More fundamentally some passengers simply 'don't like computers', a problem which Blyth says can be tackled through appropriate design and appearance of the kiosk.