Moscow - St Petersburg at the height of luxury 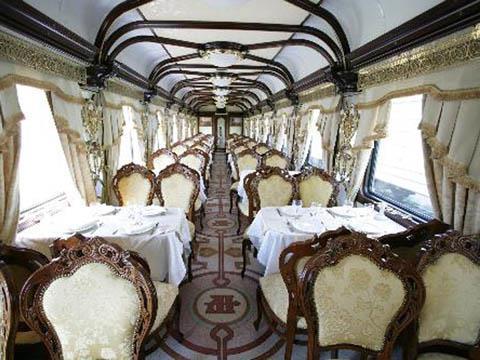 RUSSIA: Tickets have gone on sale for the Alexander Nevsky luxury train which is to be launched between St Petersburg and Moscow on April 26.

Rolling stock for the service has been refurbished by Oktyabrsky Electric Car Repair Plant. The 'first VIP' car has four convertible compartments, which can be transformed into bedrooms, rooms for children, living rooms or offices. All compartments are equipped with individually adjustable air-conditioning, internet access and a DVD player, as well as showers and controlled emission toilets.

The 'second VIP' cars have six convertible compartments, each with upper and lower berths, a wardrobe, table, chair, DVD player and internet access, plus a toilet and shower.

Nine sleeping compartments have two pairs of upper and lower berths, a wardrobe, chair and washbasin. There are also saloon coaches. Onboard services include satellite television, wireless internet access and newspapers. Hot and cold meals and drinks can be delivered to the compartments from the buffet.

Prices range from 1 697 roubles for saloon seats up to 19 215 roubles for the first VIP compartments. Conventional trains on the route are priced at around 1 000 to 1 700 roubles.