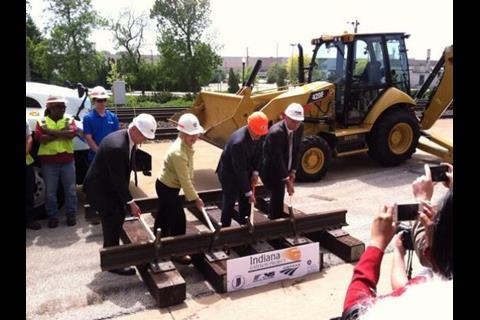 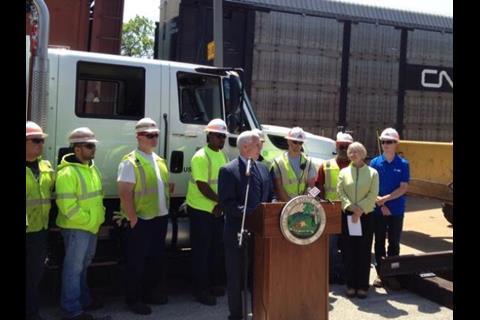 USA: Indiana governor Mike Pence joined FRA Deputy Administrator Karen Hedlund, Amtrak's Chief of State Contracts Michael Franke and Norfolk Southern Assistant Vice-President Jeff Harris at Hammond on May 29 to mark the start of work on the US$71·4m Indiana Gateway project. This is intended to relieve congestion and accelerate train movements through the northwest of the state.

Announced in January 2010 as part of the government’s high speed rail programme, and funded under the American Recovery & Reinvestment Act, the two-year project includes reconfiguration of the track layout at Porter, where Amtrak’s Chicago – Detroit trains diverge from Norfolk Southern’s former New York Central main line between Chicago and Cleveland. According to Indiana Department of Transportation, the junction is used by 14 passenger and 90 freight trains a day, leading to many pathing conflicts.

Following negotiations between INDOT and the railroads, a revised track layout was agreed in September 2012, requiring work at seven locations. As well as a new passing track for Amtrak at Porter, there will be a third freight track for NS and five sets of high speed crossovers, along with new signalling. Work is already underway, and INDOT anticipates that the remodelling will be completed by early 2016.

The Indiana Gateway scheme forms a key element in the programme to upgrade Amtrak’s Chicago – Detroit service, which currently takes 6½ h to cover the 450 km route. In 2012 Amtrak began running at 177 km/h on the 155 km between Porter and Kalamazoo, Michigan, which is fitted with GE Transportation’s Incremental Train Control System. With federal assistance, Michigan DoT purchased from NS the 216 km between Kalamazoo and Dearborn, which is now being upgraded for faster running and partially double-tracked. The whole package is expected to cut the journey times by around 30 min.

As part of the Midwest Regional Rail Initiative, the enhanced Chicago – Detroit service is expected to be operated by new double-deck trainsets ordered from Sumitomo and Nippon Sharyo by a consortium of Illinois, California, Michigan, Washington and Missouri. These will be powered by 200 km/h ‘Charger’ diesel locomotives ordered from Siemens in December.