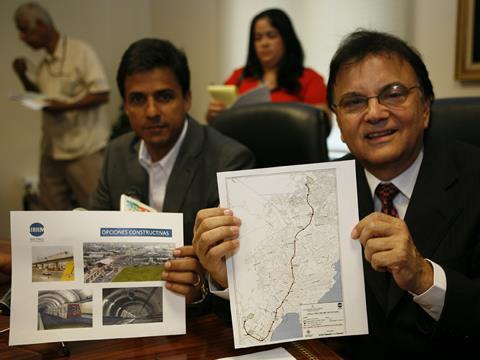 PANAMA: The government has invited prequalification tenders seeking interest in a turnkey contract to build an initial metro line in Panamá City at an estimated cost of US$1bn to US$1·5bn. The bidding process was launched by Minister of Public Works Federico José Suárez and the head of the dedicated Metro Secretariat in the president's office Roberto Roy.

A consortium of Pöyry, Cal y Mayor and Geoconsult had been selected at the end of October 2009 to provide consultancy services and conceptual design for the first line. Following a bidders conference on January 19, prequalification bids are due for submission by February 8, with the results to be announced 10 days later. Successful consortia would then be invited to submit offers by May 24 for the design, construction and fitting out of Line 1.

A preferred bidder is due to be named on June 25, with the contract signing set for July 23. The Metro Secretariat envisages that this would allow Line 1 to be completed by December 31 2013. The turnkey contract is expected to include both civil works and rolling stock, plus the maintenance depot and operations control centre.

The proposed Line 1 would start at Los Andes in the north of the city, and head south via Avenida Fernández de Córdoba and Plaza 5 de Mayo to terminate at the main transport hub in Albrook. The 14 km route includes 7 km of tunnel and 6·3 km on viaduct. There would be 16 stations, of which 11 would be underground and five elevated.

The line is to be worked by trains of up to six cars 2 700 mm wide, with a maximum length of approximately 100 m. These would be powered at 750 V DC using a third rail supply. Design capacity for Line 1 must make provision to accommodate a projected 40 000 passengers/h in each direction by 2035, with a minimum headway of 90 sec at peak times.