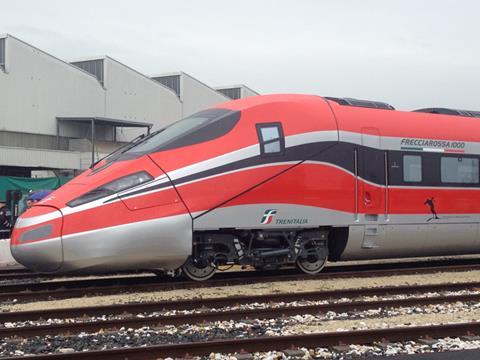 FS hailed the ETR1000 as 'the fastest series-built train in Europe', noting that it had been designed for speeds of up to 400 km/h.

FS dedicated the first trainset to Italian sprinter and European 200 m record holder Pietro Mennea, who died on March 21. The operator plans to operate the trains as Frecciarossa services at 360 km/h, cutting the current Milano - Roma journey time from 2 h 55 min to 2 h 15 min, with the prospect of a 1 h 59 min timing between Milano Rogoredo and Roma Tiburtina.

FS said that the first ETR1000 sets would enter commercial service in 2014 after completing a test programme and obtaining certification from the Italian safety authority, although operation at 360 km/h may not be authorised by then. Rival operator NTV also envisages operating its AGV Italo trainsets at 360 km/h on Italy's AV network.

Each eight-car ETR1000 set has 471 seats in four classes: Executive, Business, Premium and Standard, with a 'Silence' area in Business class. A multimedia equipment package will offer passengers access to the internet and a range of entertainment.

Ordered from AnsaldoBreda and Bombardier under a contract worth 'more than €1·5bn', the ETR1000 fleet has bogies featuring active suspension. Power equipment is distributed along the train and the 16 traction motors offer a starting acceleration of 0·7 m/s2. FS said that the train would be 'able to run on all European high speed networks'.