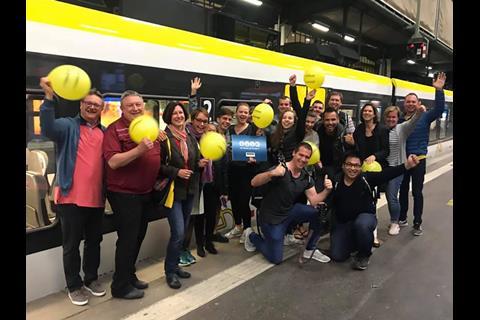 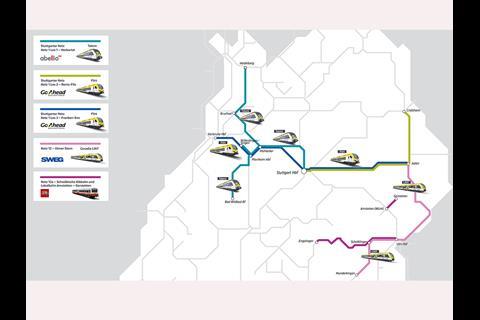 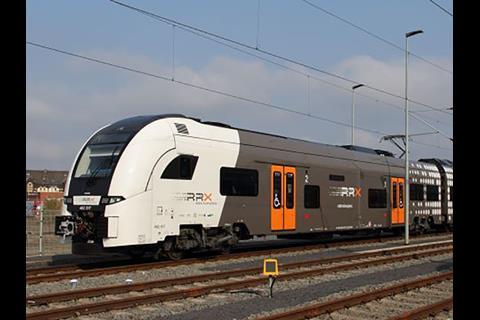 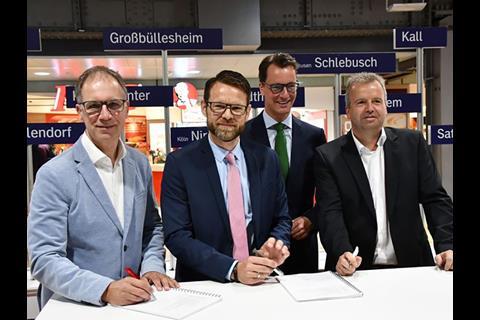 GERMANY: A number of passenger services transferred to new operators on June 9, including routes in Baden-Württemberg which are the first in Germany to be managed by UK-based rail and bus group Go-Ahead.

In 2015 the Land of Baden-Württemberg selected Go-Ahead for the Stuttgart Netz 1 Lot 2 (also known as 1b or Rems–Fils) contract covering the operation of 3·7 million train-km/year on routes from Stuttgart to Crailsheim and Ulm from June 2019 until 2032, and the Netz 1 Lot 3 (1c, Franken-Enz) contract covering 4·4 million train-km/year on routes from Stuttgart to Aalen, Karlsruhe and Würzburg. Go-Ahead is taking over the services from DB Regio in phases in June and December.

In December, Go-Ahead will also take over Netz 3a services between Stuttgart, Schwäbisch Hall and Nürnberg under a 13-year contract covering 1∙3 million train-km/year.

Stadler Pankow is to supply and maintain 66 Flirt3 EMUs for the three Go-Ahead contracts. These have been procured using the ‘Baden-Württemberg model’ under which the operator places the order and then transfers ownership of the fleet to the Land transport authority under a sale and lease-back deal. An initial 28 units are now in service, carrying the Land’s operator-neutral branding.

The operating contracts specify an increase in frequencies and train capacity, however delays to federal approval of the new EMUs mean there are initially some modifications to the timetables.

‘We are pleased to be carrying our first customers in Germany, following four years of preparation’, said Go-Ahead Group CEO David Brown. ‘The teams both in the UK and Germany have worked hard to build a new depot, secure new trains and recruit the significant number of drivers to run these services.’

NS subsidiary Abellio has taken over Netz 1 Lot 1 (1a, Neckartal) services from Stuttgart to Pforzheim and Bad Wildbard (service RB17a), Heidelberg (RB17b) and Bruchsal (RB17c), which will total 6·8 million train-km/year.

Delays to the delivery of 43 Bombardier Transportation Talent 2 EMUs have disrupted plans for the launch, and Abellio has leased DB Regio Class 425 and 426, Agilis Class 440 and AVG Class 450 vehicles for use on an interim basis.

Further north, National Express took over from DB Regio as operator of Wesel – Köln – Koblenz Rhein-Ruhr Express service RE5 on June 9, using 12 new Siemens Desiro HC EMUs. ‘We are very pleased with the successful start of operations and hope that our passengers were also satisfied with the start’, said Managing Director Marcel Winter.

There are currently some restrictions to services at stations where platforms are still to be raised. Plans to split and join services in Remagen have also been dropped in favour of running pairs of EMUs throughout, in an effort to reduce the risk of disruption on the busy route along the left bank of the Rhein.

‘The start of operations is an important contribution to improving the situation on the heavily used Rhein-Ruhr corridor’, said Heiko Sedlaczek, Managing Director of Rhineland transport authority NVR. ‘The use of the new trains will make travel on the line more reliable, even if completely trouble-free operation can not be guaranteed due to infrastructural bottlenecks’.

National Express is to take over service RE6 Köln – Minden in December this year, and RE4 Aachen – Dortmund in December 2020. Abellio will operate RE1 Aachen – Hamm from June 2020.