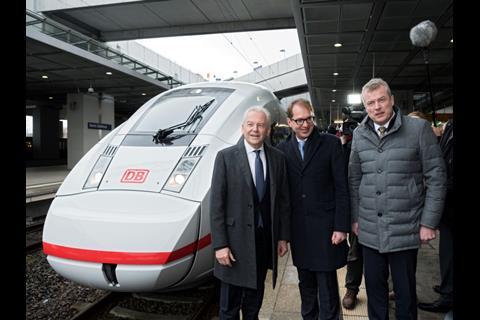 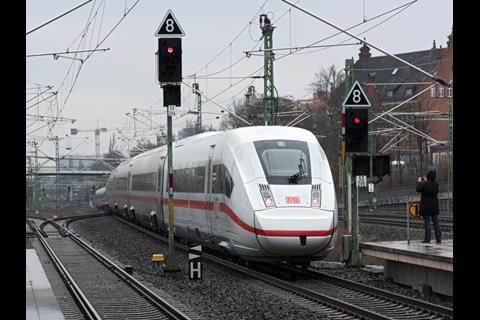 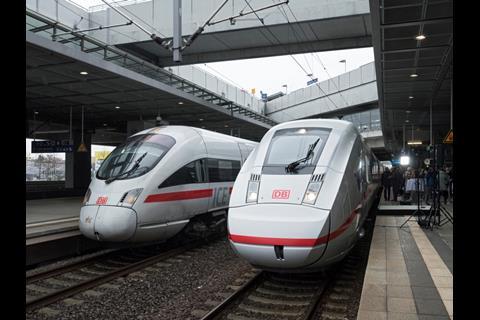 GERMANY: ‘The ICE 4 will launch a new era for inter-city travel’, said Deutsche Bahn CEO Dr Rüdiger Grube on December 4, at a ceremony at Berlin Südkreuz to unveil the first pre-series ICx trainset. He was joined by federal transport minister Alexander Dobrindt and Siemens Mobility CEO Dr Jochen Eickholt to ‘baptise’ the ICx, which has been rebranded as ICE 4 and designated Class 412.

‘The ICE 4 will continue the modernisation of the DB fleet’, said Dobrint, adding that ‘we are investing billions in infrastructure to strengthen the competitiveness of rail transport’. Grube said the new trains would ‘strengthen the long term future of our group’. Confirming that the project was on schedule, Eickholt said he was convinced that the new trains would meet all of DB’s expectations.

Ordered in 2011 under a framework contract for up to 130 trains, two pre-series units are currently undergoing commissioning trials on the national network; they are due to start a 14-month testing phase in the autumn of 2016, including 12 months carrying passengers. The first seven series-built trains are expected to arrive in autumn 2017 and enter revenue service with the timetable change in December of that year.

According to DB AG Board Member, Traffic, Berthold Huber, the modular ICE 4 trainsets, with their ‘platform concept and flexible application’, are intended to form the backbone of DB’s future long-distance fleet. Under its customer offensive launched last March, DB expects to increase its long-distance operations by 25%, providing more frequent and faster services to connect regions and cities across the country. As well as replacing loco-hauled Intercity stock, the new trains will gradually replace the ICE 1 and ICE 2 sets. With each motored car electrically independent, the units are designed for easy reconfiguration to suit changing market requirements.

Designed for operation at up to 250 km/h, the 12-car trainsets are 346 m long, with 205 first and 625 second class seats. Each unit has two driving cars and eight intermediate vehicles plus a restaurant car and a service car with crew compartment, wheelchair spaces and a family area. With an empty weight of 670 tonnes, the ICE 4 is expected to achieve a 22% reduction in energy consumption per seat compared to a refurbished ICE 1 formed of 12 coaches and two power cars.