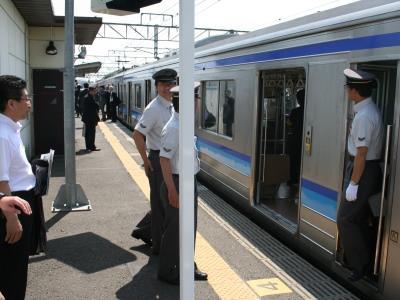 JAPAN: East Japan Railway has confirmed its intention to introduce its Advanced Train Administration & Communications System on the Tokyo suburban network in the autumn of 2017.

The company announced on October 8 that the moving-block train control system will be deployed on the 37 km Saikyo Line between Ikebukuro and Omiya, replacing the existing lineside signalling and the ageing ATS train protection equipment.

The decision follows two years of successful operation with the pilot ATACS installation on the Senseki Line in Sendai, which went live in September 2011. JR East had always envisaged that its ATACS would be used to increase capacity in the Tokyo area, and it has selected the 19-station route linking the Tokyo and Saitama prefectures to investigate the challenges of introducing moving block in a dense metropolitan area.

Unlike the Senseki Line which is a stand-alone branch with a captive EMU fleet, the Saikyo Line forms an integral part of JR East’s complex Tokyo suburban network. As well as local services between Omiya and Ikebukuro, it is used by through trains from the Kawagoe line at Omiya to reach the Yamanote Loop en route to Shinjuku and Osaki.

Under ATACS, the control centre communicates with onboard equipment by radio, receiving location reports from each train and issuing movement authorities accordingly. The trains calculate their positions using odometry and track-mounted beacons. The on-board equipment calculates a braking curve to respect the limit of movement authority and intervenes with emergency braking if this is exceeded. The moving block capability will allow the operator to reduce headways, whilst the elimination of lineside signalling will cut inspection and maintenance costs.

JR East expects to start detailed design and installation within the next few months, with construction running until 2016. This will allow around one year for testing before ATACS is put into revenue operation in the autumn of 2017.

The scheme will also allow JR East to compare ATACS with European CBTC, which is due to be installed on a 29·7 km section of the Joban Local Line between Ayase and Toride, north of the capital. Alstom and Thales were shortlisted for this project earlier this year.