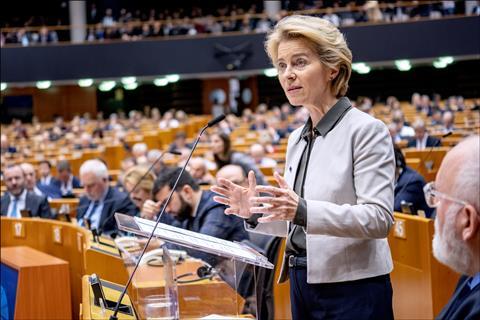 Noting that ‘transport accounts for a quarter of the EU’s greenhouse gas emissions, and is still growing’, the Commission said that ‘to achieve climate neutrality, a 90% reduction in transport emissions is needed by 2050’, with road, rail, aviation and waterborne transport all expected to contribute to the reduction.

The Commission intends to adopt ‘a strategy for sustainable and smart mobility’ during 2020, calling for a strong boost in multimodal transport to improve the efficiency of the transport system. ‘As a matter of priority’, it says, ‘a substantial part of the 75% of inland freight carried today by road should shift onto rail and inland waterways’. Measures to better manage and to increase rail and waterway capacity will be brought forward by 2021, along with proposals to revise the Combined Transport Directive.

The Commission proposes to support the development of smart traffic management systems and Mobility as a Service through funding instruments such as the Connecting Europe Facility.

Insisting that ‘the price of transport must reflect the impact it has on the environment and on health’, von der Leyen said fossil-fuel subsidies should end, including the phasing out of tax exemptions for aviation and maritime fuels, along with changes to the EU Emissions Trading System.

Clearly frustrated by member state inaction over revisions to the Eurovignette Directive, she told the Parliament that the Commission would give fresh consideration ‘as to how to achieve effective road pricing’. The TEN-T Regulation would be revised to accelerate the deployment of zero- and low-emission vehicles, while the Commission would propose more stringent air pollutant emissions standards, particularly for urban areas.

Funding is to be made available under the Horizon Europe programme to support the necessary research and innovation, while four ‘Green Deal Missions’ will bring together ‘a wide range of stakeholders’ to help deliver large-scale changes in areas such as adaptation to climate change, oceans, cities and soil.

Insisting that ‘a shift to rail is vital for delivering the European Green Deal’, the Community of European Railway & Infrastructure Companies welcomed the proposals, with Executive Director Libor Lochman describing the Green Deal as ‘an initiative of unprecedented ambition’. However, he emphasised that achieving the 90% reduction in emissions by 2050 would ‘require the European Parliament and member states to match the Commission’s ambitions’.

CER pointed out that the modal shift objectives would require ‘a step change in investments in rail infrastructure capacity’, both through network expansion and the use of digital traffic management technologies such as ERTMS. Suggesting that ‘effective transport pricing and affordable railways are the only way forward to improve traffic patterns and foster sustainable modal choices of passengers and logistics operators’, it said the principles of ‘user pays’ and ‘polluter pays’, should ‘not be given up under any circumstances’.

UNIFE ‘strongly welcomed’ the masterplan, and particularly the modal shift objectives. It noted that the rail supply industry would also support other policy areas including ‘clean, reliable and affordable energy’’ and ‘mobilising industry for a clean and circular economy’. It noted that von der Leyen envisaged that up to €100bn would be available to finance the transition to sustainable mobility and safeguarding Europe’s industrial and economic competitiveness. ‘Vision and ambition is what Europe needs, and this is what the Green Deal brings’, said UNIFE Director-General Philippe Citroën. ‘Rail is part of the solution to fight climate-change and deliver a sustainable economy and society for the future generation.’

Declaring that ‘the rail industry is the key to clean mobility’, German rail industry association VDB said it supported the ambitious climate targets, calling for concrete instruments to support a strong European industry able to deliver the necessary technologies. ‘The world literally needs clean mobility’, said VDB General Manager Ben Möbius. ‘This can be a great European success story. But Europe must be the leading provider and the leading market.’