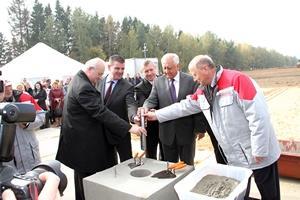 BELARUS: Prime Minister Mikhail Myasnikovich attended a ceremony on October 4 to launch construction of a factory at Fanipol near Minsk where a 40:60 joint venture of tram manufacturer Belkommunmash and Stadler Rail of Switzerland will jointly assemble rolling stock for the CIS market.

‘We are planning to build a really high-tech, world-class facility’, said Myasnikovich. He also highlighted Russia and Kazakhstan as potential export markets.

State-owned Belkommunmash said the Electric Transport joint venture would offer a wide range of products, including urban and inter-regional electric and diesel trainsets, metro cars, trams and trolleybuses. The first vehicles are expected to roll out in 2014.

National railway BC has acquired 10 Stadler Flirt EMUs, and is at the final stages of negotiating an order for additional trainsets which would be assembled in Belarus.