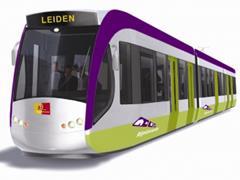 NETHERLANDS: Movares has been awarded a contract by ProRail to design the project to convert the Gouda – Alphen aan den Rijn – Lammenschans line to light rail standards. The section from Gouda to Alphen is expected to be completed in 2010, the remainder by 2015.

The move follows the long-running trial of LRVs on ProRail's branch line between Alphen and Gouda, which began in 2003. HTM operates a fleet of Bombardier A32 cars alongside NS Reizigers Plan V EMUs, which work peak-hour services between Leiden and Gouda.

Under the original RijnGouwe project specification, the tram-train operation between Alphen and Gouda would have been extended to Lammenschans and Leiden. However, the residents of Leiden rejected the original route through the streets of the city centre in a referendum in March 2007, putting the extension in doubt. The Leiden municipality and the province of Zuid Holland have now reached agreement on an alignment that would take the LRVs to the northeast of the central area at a projected cost of €83m, against €71m for the original route.

The final phase of the project would see new lines built to serve the coastal resorts of Noordwijk and Katwijk.