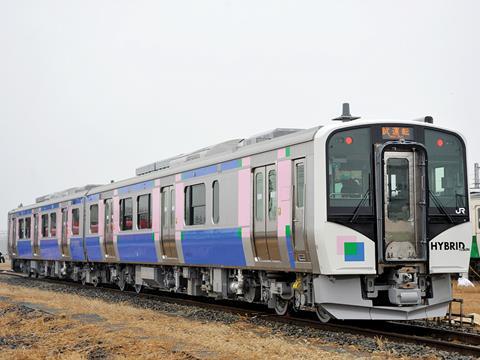 JAPAN: East Japan Railway has begun test running with the first of eight Series HB-E210 two-car battery-diesel multiple-units which are being supplied by J-TREC.

The units are expected to offer a 60% reduction in NOX and particulate emissions compared to conventional DMUs.

JR East ordered the hybrid DMUs in 2013 for use on services which will run through from the 1·5 kV DC electrified Senseki Line to the 20 kV 50 Hz Tohoku Main Line via a newly-built non-electrified link near Sendai.

The two-car HB-E210 has been developed from the EB-E200 prototype, which is in service on the Koumi Line. The 1 067 mm gauge unit is powered by an underfloor six-cylinder 450 hp engine giving a maximum speed of 100 km/h. Three roof-mounted 15·2 kWh lithium-ion batteries are used to store energy regenerated during braking for use during acceleration.

The high-capacity interior has a mix of longitudinal and transverse seats, with extensive standing space to give a total capacity of 128 and 134 passengers per car. The floor height is a compromise to suit the different platforms on the Senseki and Tohoku Main lines. There are three pairs of doors per coach side, with heated slide rails to prevent freezing in winter.

The DMU is equipped with LED lighting, passenger information screens and audio announcements, and one car has an accessible toilet.