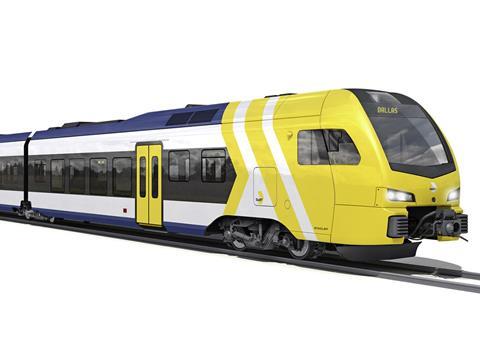 The 42 km line between Dallas/Fort Worth International Airport and Shiloh Road in Plano is under construction for opening by the end of 2022.

The DMUs for the Cotton Belt project are required to be compatible with the Flirt units already in service on Trinity Metro’s 43 km TEX Rail commuter line, which will share the airport station.

Each Cotton Belt DMU will be have four passenger cars plus the central power module, with four powered and eight unpowered axles. They will meet EPA Tier 4 EPA emissions standards, as well as FRA safety standards.

They will have a capacity of 240 seated passengers and 225 standing passengers, and will be compliant with the Americans with Disabilities Act. CCTV will be fitted, as well as an automatic passenger counting system which will be able to count the number of people boarding and alighting at each station and detect blockages in the boarding areas or crowding in areas of the trains.

Stadler will also advise depot contractor Urban Engineers on the design of the maintenance facility.

The order announced on June 3 is the fourth which Stadler has won in Texas, with Capital Metro in Austin, Denton County Transportation Authority in Lewisville and TEX Rail in Fort Worth already using Stadler vehicles.