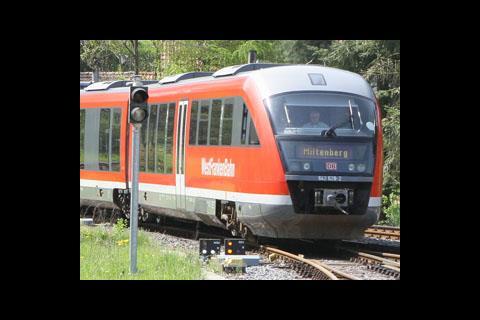 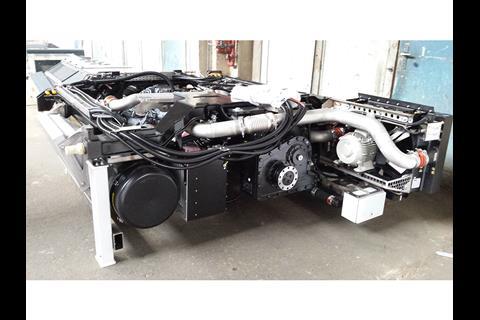 GERMANY: The EcoTrain project to test electric energy storage on a DB Regio Class VT642 diesel multiple-unit reached a further step on June 27, when work began to install the key components on a demonstrator trainset for trials on the Erzgebirgsbahn in Sachsen.

The modular conversion is being developed by DB RegioNetze in partnership with Chemnitz and Dresden technical universities and the Fraunhofer Institute in Dresden. A motor/generator attached to the hydromechanical drive train captures braking energy for storage in a roof-mounted Li-ion battery pack.

The project partners are hoping to obtain approval from the Federal Railway Authority for the prototype to operate in passenger service from 2017. Work would then start on a pre-series build of 12 units for use on the Erzgebirgsbahn from 2018. The modification could later be rolled out across the large fleet of around 600 VT642 DMUs used by several operators in Germany.

An initial feasibility study by the three institutes has underpinned the technical development. This includes reducing the weight of the hybrid components, given that in an earlier trial the number of seats had to be reduced to keep the vehicle weight within acceptable limits. According to project manager Claus Werner, integration of the ‘relevant auxiliary equipment’ such as air-conditioning should ensure ‘exemplary energy management’.

Unlike the earlier trials, EcoTrain uses an intelligent energy management system linked to the onboard signalling and driver advisory systems. This is intended to ensure an optimal power split between electric and diesel operation, based on the train’s movement authority, route topology and energy storage reserves. The stored electrical energy would be used to power the trains in sensitive places, such as passing through tunnels or urban areas.

Dulig said Sachsen was banking on sustainable technologies for the future, and was ‘taking a keen interest’ in EcoTrain ‘for environmental, transport and economic reasons’. The project is being funded by the federal Ministry of Transport & Digital Infrastructure under its electro-mobility research programme and Parliamentary State Secretary Norbert Barthle said the aim was to ‘promote the development of electric mobility open to all technologies and modes’. He hoped that the Land would provide ‘follow-up support’ for a successful ministry-led project. DB confirmed that talks were already underway with Sachsen regarding the proposed pre-series build.