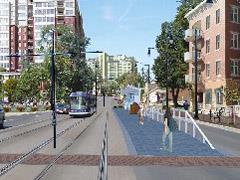 CANADA: The Regional Municipality of Waterloo has appointed Parsons Brinckerhoff as its general engineering consultant for the C$818m project to build a 19 km light rail line and a 17 km bus rapid transit network.

The light rail line would run from Conestoga Mall in Waterloo to Fairview Park Mall in Kitchener, with 16 stops including an interchange with bus and rail services at King Street. A second phase would extend the line 17 km to Ainslie Street in Cambridge.

Parsons Brinckerhoff will assist with the preparation of design criteria and performance requirements for the project.

The municipality plans to invite expressions of interest later this year in a design, build, finance and operate public-private partnership contract, with a view to construction getting underway in 2014 for completion in 2017. Initial estimates suggest 14 light rail vehicles would be required.