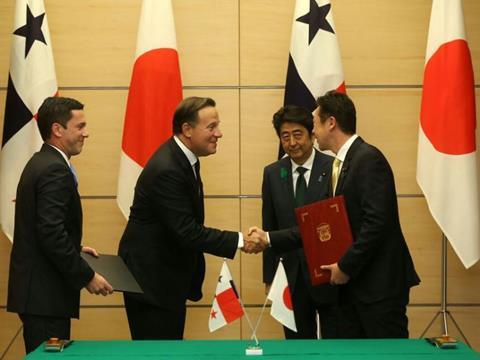 PANAMA: The governments of Panama and Japan finalised the agreement for the construction of Panamá City metro Line 3 on April 20, at an event attended by President Juan Carlos Varela and Japanese Prime Minister Shinzo Abe.

The initial technical and financial co-operation agreement was signed on January 14. The US$2·6bn deal would enable the construction of what Panama says will be the first monorail in the Americas to use Japanese technology.

The 26·7 km route with 14 stations would start at Albrook station on metro Line 1 and run west across the Panama Canal, before serving the Panama Pacific special economic zone, Arraijan and Ciudad del Futuro. The depot is to be located at the western end. Initial ridership is forecast at 20 000 passengers/h per direction, rising to 31 862 in 2050, after the second phase opens from Ciudad del Futuro to La Chorrera.

Construction is to begin in 2017, with operations on the initial phase due to start in 2021. The agreement includes non-refundable technical co-operation worth up to US$350 000 to hire a project manager.

The 20-year soft loan provided by JICA has three years for disbursement and a six-year grace period. The first of up to five tranches will be worth up to ¥29·575bn. The interest rate will be the six-month yen Libor minus 1·05%, with an initial fee of 0·2%.

The financial assistance forms part of the Japanese government’s ¥1·3bn programme to support projects that would help to fight climate change.