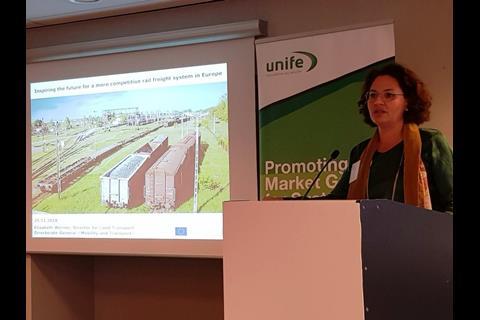 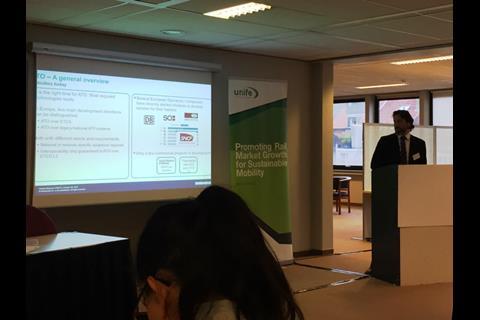 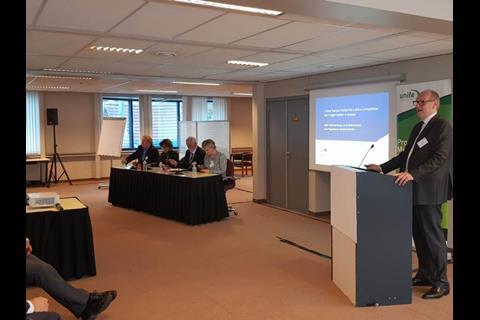 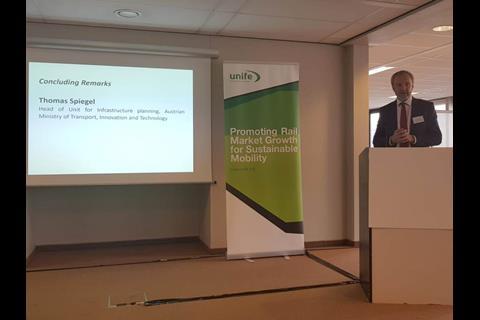 Emphasising that rail freight had a key role to play in the decarbonisation of European transport, Werner warned that the business faced ‘a lot of inter-related challenges’ which would need both technical and operational innovation to overcome. At present, she said, rail freight had an image of being ‘not modern, not well-connected, with old equipment and low profit margins’. While rail had a 17% market share by tonne-km, that fell to less than 10% by value-km, because of the continuing dominance of low-value bulk traffic.

However, there were ‘really high’ political and societal expectations that rail’s market share should increase to 30% or more by 2050, despite a predicted doubling in the overall market size. With traditional bulk freight volumes declining, Werner said rail needed to become more flexible and service-oriented to capture higher-value business as part of a multimodal logistics chain.

The ERIFA document has been drawn up by UNIFE’s freight committee to highlight emerging technologies that could contribute to driving change in the rail freight business. Committee chair Lars Deiterding from HaCon said the aim was to ‘initiate an internal transformation process’ by presenting ‘ideas to transform and improve the sector’. The agenda was intended as a ‘living document’ that would evolve over time, he said, explaining that the workshop was an opportunity to seek input from train operators, infrastructure managers and customers about their priorities.

ERIFA is intended to sit alongside the Shift2Rail Innovation Programme 5 on ‘sustainable and efficient rail freight’, and to draw attention to a number of innovative technologies that ‘the industry thinks that it is capable of providing’, Deiterding explained. As such, he hoped that it could provide input to a second Shift2Rail programme for 2020-30.

Shift2Rail Executive Director Carlo Borghini agreed that rail freight needed to play a bigger role in future research, looking at the prospect of ‘logistics on demand’. He welcomed the ERIFA approach which could help to identify the sector priorities for innovation and inform future workstreams.

UNIFE has looked at five core objectives: energy efficiency, capability/productivity, reliability, noise reduction and total cost of ownership. It has identified 27 specific areas for innovation, grouping them into rolling stock, infrastructure and IT. A core theme running through the discussions was digitalisation and making better use of data, notably real-time vehicle tracking and the use of smarter wagons. Various participants flagged up the importance of not simply digitising existing operational processes, but using data to do things differently.

Bombardier’s Innovation Manager Andrea Mazzone emphasised the opportunities offered by automation, suggesting that ‘ATO is the only chance for rail freight’. Insisting that ‘the technology is ready’, and citing fierce competition from other transport sectors including the platooning of automated electric lorries, he predicted that by 2025 no major rolling stock order would be placed without provision for ATO.

Istvan Hedegüs from Knorr-Bremse reported on developments in the digitalisation of freight wagons, highlighting how the introduction of a simple GPS tracking system had flagged up operating inefficiencies. He cited one specific out-and-back service, where the vehicles were only moving for 13% of the total cycle time, but spent 37% of their time standing in loops and sidings waiting for a path. However, he insisted that ‘digitalisation is much more than telematics’, predicting the emergence of a smart ‘system of systems’.

With some delegates suggesting that innovation and digitalisation were constrained by the current regulatory regime, EU Agency for Railways Executive Director Josef Doppelbauer insisted that standards should be seen as an enabler rather than a hindrance, suggesting that many of the 27 technologies identified in ERIFA were ‘already possible’. As an example, he said forthcoming amendments to the Operations TSI could bring a predicted 1·5% saving in operating costs by simplifying cross-border handovers.

Citing experience following the Rastatt closure in 2017, SNCF Logistics CEO Sylvie Charles said more work was needed to improve communications between operators and infrastructure managers to facilitate diversionary routes through different countries. The rail sector has already drawn up an action plan for improvements, but needed to push the member states to ‘just do it’.

Summing up on behalf of the current Austrian Presidency of the EU Council, Thomas Spiegel said ‘efficient rail’ was an essential element in future transport and decarbonisation strategies. Austria had a higher than average market share for rail, thanks to consistent policies designed to encourage modal shift, and ‘huge investment in infrastructure’ he reported. Adding that ‘it is important to get follow-up’, he said a new position paper on priorities for rail freight would be adopted at the Rail Freight Days event in December, building on the Rotterdam Declaration signed under the Dutch Presidency in 2016.