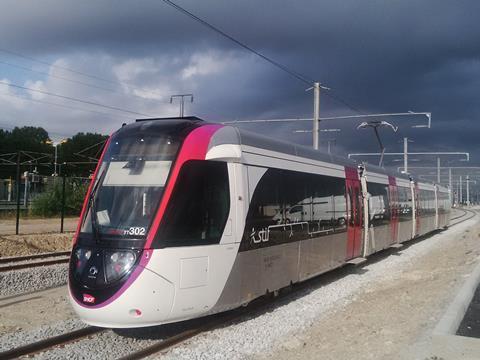 FRANCE: The arrival of the first Alstom Citadis Dualis tram-train cars at the Noisy-le-Sec maintenance depot on July 12 marked the start of commissioning of the T11 Express tram-train line in the northern suburbs of Paris.

T11 Express is being delivered in two phases and involves the adaptation of part of a freight railway alignment for tram-train services to improve rail links between districts in the north of the city. Ultimately intended to serve a 28 km corridor between Sartrouville in the northwest of the city and Noisy-le-Sec to the east, the first phase is due to open in July 2017 over an 11 km route between Epinay-sur-Seine and Le Bourget serving seven stations. Interchange will be provided along the route with RER, metro and tram services.

Alstom is delivering 15 Citadis Dualis cars for T11 Express under a framework contract agreed with SNCF in 2007; SNCF is procuring the vehicles on behalf of STIF. Maximum speed on the T11 route would be 100 km/h, with an end-to-end commercial speed of 50 km/h.

According to STIF, the planned extensions at either end of the starter section of the route are still subject to detailed design work and no firm timescale for their opening has been announced.