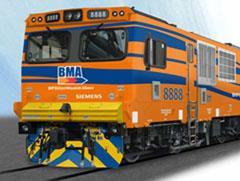 AUSTRALIA: The BHP Billiton Mitsubishi Alliance has awarded Siemens a contract to supply 13 electric locomotives for use on heavy-haul coal trains in Queensland.

Announcing the order on July 12, Siemens said the 1067 mm gauge locomotives would be 'some of the highest-powered narrow gauge electric locomotives in the world'.

The 25 kV AC locomotives are scheduled to enter service in late 2013, hauling coal from the Caval Ridge and Daunia mines to Hay Point Coal Terminal in the Bowen Basin.