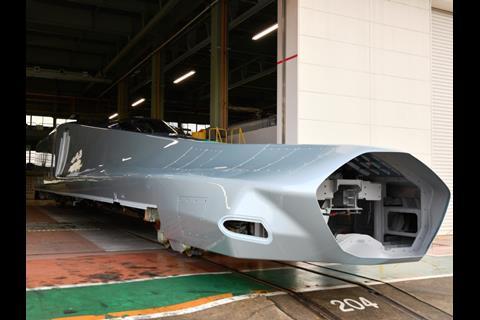 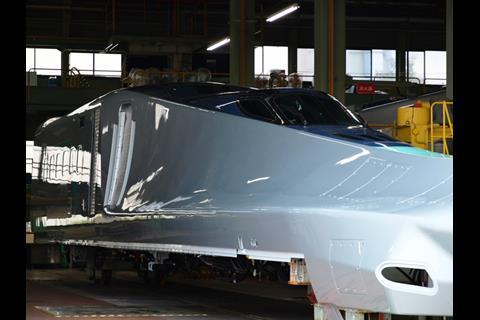 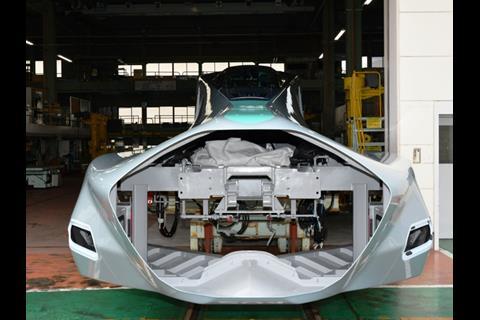 JAPAN: The first driving car bodyshell for East Japan Railway’s Series 956 high speed test train was unveiled in Kobe on December 12. Being manufactured by Kawasaki Heavy Industries, the 10-car trainset is expected to begin test running in May.

Designated ALFA-X for Advanced Labs for Frontline Activity in rail eXperimentation, the test train is intended to pave the way for a new fleet of high speed trains to operate on the Tohoku Shinkansen. The railway’s aim is to increase the maximum speed from 320 km/h to 360 km/h by the time that the Hokkaido Shinkansen reaches Sapporo.

Completion of the extension from Shin-Hakodate-Hokuto to Sapporo is scheduled for the 2030 financial year, when the series fleet derived from ALFA-X is expected to enter service. The target is to cut the Tokyo – Sapporo journey time to under 5 h, compared with a current best timing of 8 h with a change in Hakodate.

The ALFA-X testbed will incorporate two different nose designs, in order to study the pressure waves and noise generated when entering tunnels at very high speeds. First to be unveiled is Car 1, which is expected to operate at the Tokyo end of the train. This has a similar nose to the existing Series E5 trainsets, but lengthened from 15 to 16 m.

Car 10, which has still to be completed, will have an even longer 22 m nose with a more complex shape, at the cost of a much reduced interior space.

Other innovations to be tested include enhanced emergency brakes, derailment prevention systems for use in the event of an earthquake and active suspensions designed to limit vibration.