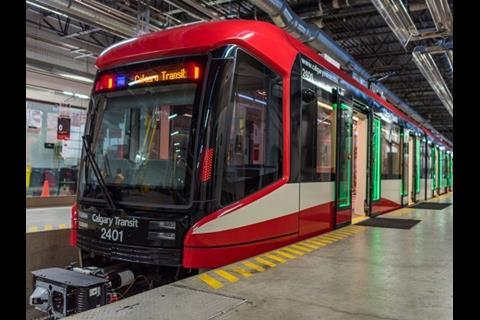 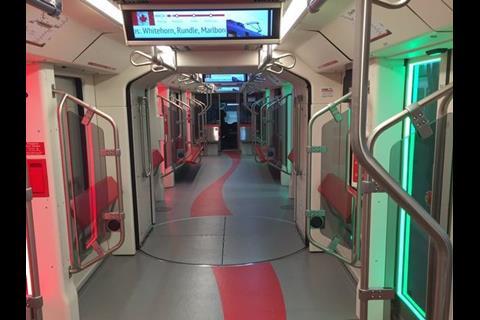 CANADA: Calgary Transit unveiled the first of 63 Siemens S200 high-floor light rail vehicles at its Oliver Bowen Maintenance Facility on January 14. According to Calgary Transit, the design is inspired by a hockey goalkeeper mask, and was chosen by city residents ahead of designs inspired by the Bow River and a buffalo.

Calgary Transit placed an order with its traditional supplier in September 2013. It expects the first vehicle to enter passenger service in spring, with deliveries due to run until early 2017. Calgary Transit intends to use most of the new LRVs to increase capacity, allowing the introduction of four-car trains on some routes. A smaller number will start the replacement of the city’s oldest U2 cars which date from 1981.

The LRVs are being built at Siemens’ Sacramento plant and are designed for local conditions, with thermal insulated walls, triple-glazed windows with low solar transmittance, electric floor heating, forced air HVAC and advanced corrosion protection coatings. The through-gangwayed interiors have slip-resistant flooring, infotainment screens and twice the number of speakers as the old LRVs.

In addition to interior CCTV cameras, the vehicles are equipped with high-resolution exterior cameras. LED lighting is used inside and out, and there are sloped floors at all doors for level boarding. The driver’s cabs have been made larger, with a glazed partition behind the cabs rather than a solid screen, as well as a heated windscreen. The vehicles also transmit diagnostic data in real time.