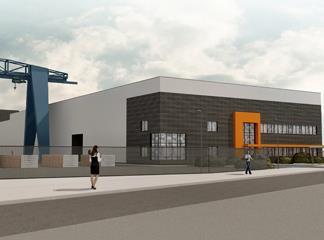 UK: Work is set to begin shortly on the construction of a concrete sleeper plant in Doncaster which will supply more than half of Network Rail's annual needs. Production is scheduled to start in spring 2013.

The factory on the former Woodyard site will be owned and funded by Network Rail, which is seeking to protect supplies and reduce costs by increasing competition and introducing modern production methods.

The plant will be built and operated by the Trackwork Moll consortium of local firm Trackwork and German company Leonhard Moll. The consortium will procure and own the specialised production machinery, and has a 10-year contract to supply sleepers to Network Rail.

Building the concrete sleeper factory is a strategic decision for Network Rail, according to Martin Elwood, director of the infrastructure manager's National Delivery Service. There are currently two UK suppliers, Cemex and Tarmac, but Tarmac is seeking to leave the market and only retains a small presence to serve an existing Network Rail contract which runs to March 2013.

'We need around 700 000 concrete sleepers each year and, once commissioned, this factory will produce around 400 000 of those', said Elwood. 'It will also directly create around 30 new jobs, with knock-on benefits to the local supply chain.'