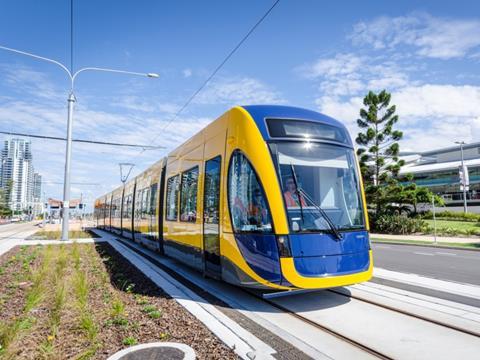 AUSTRALIA: The Queensland government is inviting expressions of interest from August 10 until August 28 for construction of the second phase of the Gold Coast light rail line.

A revised route has been developed for the northern extension, which could be built for less than half the cost of the original proposal, according to the state government. The 7·3 km alignment would run from the current northern terminus at Gold Coast University Hospital to Helensvale, where interchange would be provided with Queensland Rail services to and from Brisbane. The end-to-end journey time on the extension would be 11 min.

According to Queensland Deputy Premier Jackie Trad, a contribution from all three levels of government is required if the project is to be built in time for the Commonwealth Games, which Gold Coast is hosting in 2018. The city has already said that it will provide funding, but the federal government is currently refusing to support urban rail projects.

The initial 13 km phase of the G:Link line opened in July 2014 from University Hospital to Southport, Surfers Paradise and Broadbeach. It was built by the GoldLinQ consortium of McConnell Dowell, Bombardier and Keolis under an 18-year PPP concession valued at A$1bn and is operated by the KDR Gold Coast joint venture of Keolis and Downer Rail.