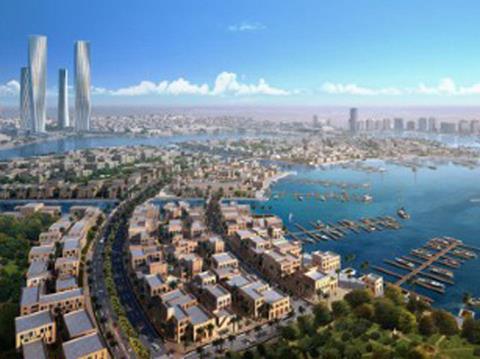 QATAR: Civil works contracts have been awarded for construction of a light rail network to serve the new city of Lusail which is being developed on a 37 km2 waterfront site 15 km north of Doha.

Lusail is expected to accommodate 200 000 residents, with an equivalent number of daily commuters and other visitors. Contractor Vinci said starting with the transport infrastructure reflects a 'modern, efficient vision of urban development'.

The four-line Light Rail Transit network being developed by Qatar Railways Co will total 28·8 km, with 7·6 km and eight of the 32 stops underground. There will be connections with the planned national rail network at two stations on Al Khor Highway.

Design began in August 2007, with the QDVC 51:49 joint venture of Qatari Diar and Vinci Construction Grands Projets starting earthworks and excavations for cut-and-cover tunnels in March 2009. On August 3 this year QDVC announced a further 38-month design-build contract worth €374m covering the eight underground stations, a viaduct over the motorway and preliminary works for the depot.

Rolling stock and systems contracts will form the final phase of the project, which is scheduled for completion in 2016. Turner & Townsend is advising QRail on the project.