Inter-city EMUs being commissioned for Euro 2012 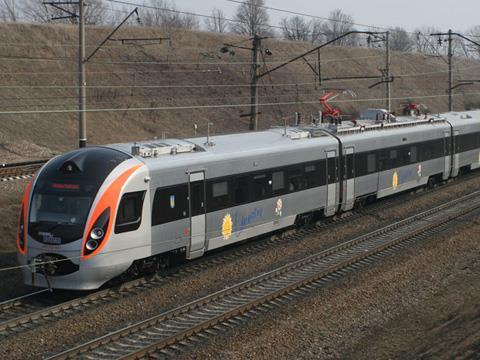 The next unit is expected to arrive in mid-May, with the four scheduled to enter revenue service in time for the Euro 2012 football championships in early June.

The first trainset to arrive was unit 002, which was delivered to Odessa on March 11 and hauled to Kyiv four days later. Unit 001 arrived on March 17, and 003 was delivered on April 9, being officially handed over to UZ on April 15. The fourth unit is expected to arrive in mid-May, followed by the fifth and sixth unit in early June. The other four will follow in July and August.

During initial discussions with Hyundai Rotem in 2009, UZ had also envisaged ordering four similar diesel inter-city trainsets, but this was subsequently dropped from the final contract for lack of funding.