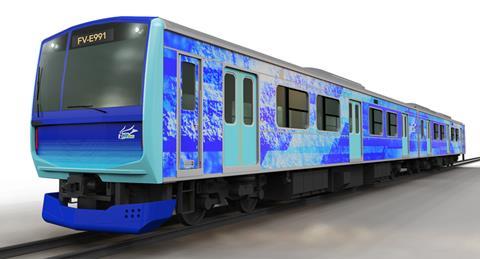 JAPAN: East Japan Railway, Hitachi and Toyota Motor Corp are to collaborate to test the use of batteries and hydrogen fuel cell hybrid traction systems adapted from technology used in the road sector.

The HYdrogen-HYBrid Advanced Rail vehicle for Innovation trial will use JR East’s Series FV-E991 hydrogen test train. Testing is scheduled to start in March 2022 on routes including the Tsurumi and Nambu lines, with the two-car Hybari unit expected to have a maximum speed of 100 km/h and range of around 140 km.

Announcing the development agreement on October 6, Hitachi said hydrogen can be produced using renewable energy, and the project aims ‘to further improve the environmental superiority of railways and realise a sustainable society’.

The project will bring together JR East’s rolling stock design and manufacturing capabilities, hybrid drive systems which Hitachi has developed with JR East, and Toyota’s expertise from the development of fuel cells for its Mirai car and SORA bus. The road technology will need adapting to achieve the higher power output necessary for rail, Hitachi said.

The test train will be fitted with four Toyota 60 kW solid polymer electrolyte fuel cells, along with two Hitachi 120 kW lithium-ion batteries which will be charged by the fuel cells and used to capture regenerated braking energy. The Hitachi hybrid drive system will provide power to the traction motors from both the fuel cell and the battery.

The Hybari train’s blue splash livery represents water generated from the chemical reaction in the fuel cells, as well as ‘a sense of speed and a futuristic image’, while the lark is a harbinger of spring and represents the introduction of new energy systems ‘like a breath of spring onto the land’.