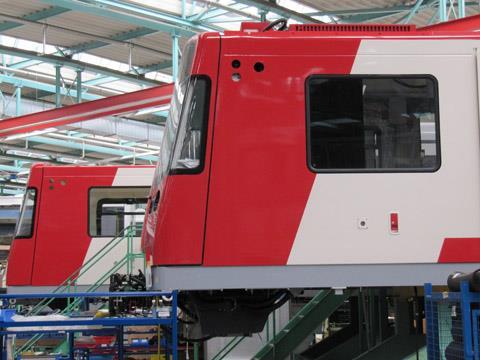 GERMANY: VAG Nürnberg's first DT3-F metro train arrived at the operator's depot in Langwasser at the end of August, following tests at the Siemens plant in Wien. The trainset will now undergo commissioning trials, initially on a test track, and later on the U-Bahn network during non-traffic hours. The fleet of 14 DT3-F trains is expected to enter service during 2011.

The DT3-F is a development of the DT3 trains in service on lines 1 and 2, and is equipped with a driver's cab, allowing it to be used in manual mode on Line U1 and in automatic mode on lines U2 and U3. The cab can be removed later to convert the train for fully-automatic operation.

New features include monitoring of the coupling between two units, to prevent the train from departing when something falls into the area between the coupled trains, passenger information screens, and passenger counting sensors on the train doors to assist service planning and income distribution.

Unlike the DT1 and DT2 trains, the driver's cab in the DT3-F has no door to the platform. Instead, driver access is via a door to the passenger saloon. The cab may be removed later if the vehicles are converted to operate under automatic operation.