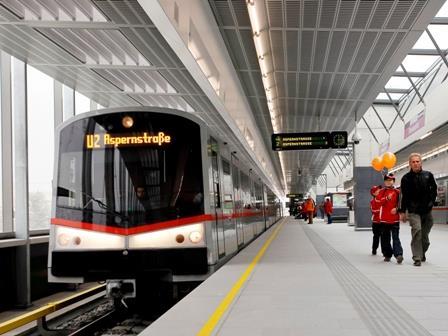 AUSTRIA: Wiener Linien inaugurated the eastern extension of metro line U2 from Stadion to Aspernstrasse on October 2, after four years of construction work. The event was attended by the Mayor of Wien, Michael Häupl, and Deputy Mayor Renate Brauner. The new section has six stations and crosses over the Danube between Donau Marina and Donaustadtbrücke stations.

U2 is now 12·5 km long with 17 stations, and journey time between Karlsplatz and Aspernstrasse is 24 min. The line is being extended by a further 4•5 km with three stations to Seestadt Aspern, site of a major urban development project. Opening is envisaged in 2013.

Southern expansion of lines U1 and U2 is also planned. Work is due to start soon on a 4·7 km extension of U1 from Reumannplatz to Rotneusiedl, with six stations, while U2 is likely to be extended by 4•6 km from Karlsplatz to Gudrunstraße by 2019.